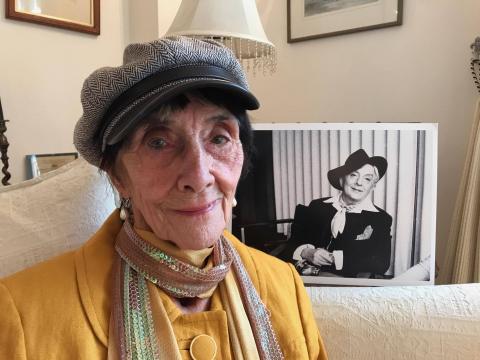 Eastenders Star June Brown MBE joins Union J singer Jaymi Hensley and a whole host of LGBTQI+ celebrities to record a charity single and video to mark the 50th anniversary of the partial decriminalisation of homosexuality in England and Wales.

2017 is a special year for the LGBTQI+ community in the UK as it marks the 50th Anniversary of the Sexual Offences Act 1967.

La La Music UK and Klubkidz Productions wanted to celebrate this momentous anniversary year in their own special way, and commemorate the work of human rights activists as well as ordinary Britons who fought hard for equal rights.

To round off an amazing year of creative artistic and media events, we would like to celebrate the achievements of our past 50 years by releasing the song  ‘Love Is The Only Law’ and hosting a charity and launch event at the Groucho Club, Soho on Sunday 3rd December at 7 pm. https://loveistheonlylaw.eventbrite.com

It took almost 500 years from the passing of the Buggery Act 1533, which made homosexuality punishable by death, to reach partial decriminalisation in 1967. As we mark the 50th anniversary of the Sexual Offences Act 1967, it would serve us well to recognise how far we’ve come, and yet how far we still have to go, especially in other countries around the world.

Love Is The Only Law production:

The single entitled 'LOVE IS THE ONLY LAW' is the brainchild of '4 Poofs and a Piano' star David Roper who joins forces of creativity with new recording artist Lady Bee and KlubKidz producer Jason Prince. Together with former activist Lynn Sutcliffe of Mighty Productions, this team of friends has written an inspirational, bittersweet and moving song. With the blessings of movie producer and former George Michael manager, Simon Napier-Bell, the songwriters were inspired to compose the lyrics for the song after attending the premiere of his movie '50 Years Legal'.

The project has expanded with the involvement of TV celebrities, Pop Stars, youth groups/students and popular entertainers from the LGBTQI+ community.

LGBTQI+ YOUTH PROJECT AND FRIENDS - LOVE IS THE ONLY LAW - single will be released in early December as a hot contender for the traditional Christmas number 1.

We are delighted to support The Albert Kennedy Trust with this project, as their work specifically helps young LGBTQI+ people who are facing homelessness, living in hostile environments or experiencing abuse for simply being who they are. https://www.justgiving.com/fundraising/loveistheonlylaw50yearslegal

(List of artists confirmed to record single and video)

4 Poofs and a Piano (Friday night with Jonathan Ross)

Lana Pillay (Pistol in my pocket)

Hazell Dean (Searchin' / Who's leaving Who)

This year has been a difficult one, uncertainties in our hearts and minds have grown. Albeit where there is a tragedy, there is resilience and tenderness. Things change, but with each change comes a glimmer of hope. The passion that comes from the youth of a generation should be vibrant and always present.

‘Love is the only Law’ is more than just a song, it is a movement of togetherness, humanity, courage, and the youth within all of us. It is celebration of all the colours, beauty and love this world has to offer, yet many refuse to acknowledge this.

Find out all the latest news & updates from LaLa Piano Bar by following us on social media.

'Just want to say a special thank you to David and Shamil and of course the fabulous Lady LaLa for creating a fabulous event to help celebrate my turning 30 bash, it was a night I will certainly remember!'

'La La Piano Bar is a supportive and encouraging platform for new and established performers alike. From the organisers to the audience it attracts, La La buzzes with vitality. It has helped me find my feet as a solo performer again; it is an absolute joy to perform there!'