We've been nominated for the #LGBT Community Organisation category at the National Diversity Awards 2018! 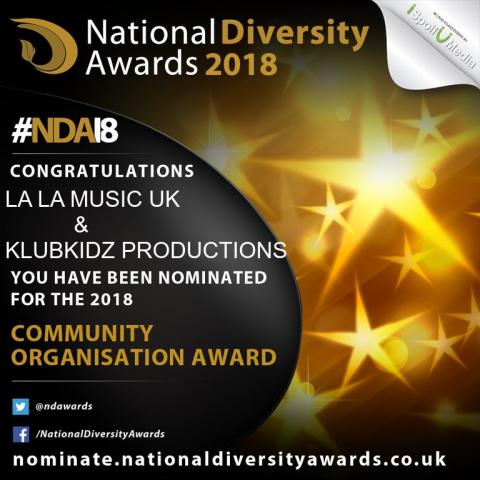 You can add your vote via this link: Vote for La La Music UK & Klubkidz Productions

The breath-taking Liverpool Anglican Cathedral will play host to this year’s awards, to be held on 14th September. Britain’s most inspirational and selfless people will come together to honour the rich tapestry of our nation, recognising individuals and groups from grass roots communities. The prestigious black tie event recognises nominees in their respective fields of diversity including age, disability, gender, race, faith, religion and sexual orientation.

Olympic Diver Tom Daley said, 'The National Diversity Awards is a true celebration. A celebration of role models and community organisations who are having a huge impact on people lives. Everybody who has been nominated and shortlisted is striving towards making society better for everyone, regardless of age, gender, race, faith, religion, sexual orientation or disability. I would like to wish all nominees the very best of luck at this year’s National Diversity Awards'.

The National Diversity Awards receives over 20,000 nominations and votes annually. Founder & CEO Paul Sesay said, ‘After an eye opening year we look to those who represent progress, spirit and resilience. As we enter our 07th awards season, the game changers and peace makers who remain unheard will shine under the spotlight, and reach every section of society with their passion and positivity. I look forward to learning about this year’s nominees and witnessing their spectacular journeys.’

La La Music UK and Klubkidz Productions have been jointly nominated for the Community Organisation #LGBT category of the National Diversity Awards 2018 #NDAwards.

The nomination recognises their national campaign from September to December 2017 to commemorate the 50th Anniversary of the partial decriminalisation of homosexuality - the Sexual Offences Act 1967. They wrote a charity single Love Is The Only Law and brought together the LGBTQI+ and straight community together to record a video plus run series of national and international events in aid of the Albert Kennedy Trust. More info on www.loveistheonlylaw.com.

EastEnders legend June Brown MBE, Samantha Fox, Jaimy Hensley, 4 Poofs and a Piano and over 50 celebrities and young people joined in the production of the single.

It featured in over 40 national and local TV, radio and newspapers, they organised 4 major promotional events, achieved over 50K views on social media platforms,  the single was included in the top 16 charity songs in 2017 and more importantly the campaign raised awareness about the importance of this special anniversary and LGBTQI+ issues in the society. The single also reached top 39 on iTunes charts and raised a substantial amount for the project.

A bit more about the companies:

La La Music UK is an events and entertainment management company in the UK.

LLMU represents acts such as 4 Poofs and a Piano, a house-band from the Bafta award winning 'Friday Night With Jonathan Ross on BBC1' www.4poofsandapiano.com

4 Poofs and a Piano are a comedy vocal quartet formed in 2000. They were the house band on the Bafta award winning BBC One chat show Friday Night with Jonathan Ross throughout the show’s run from 2001 to 2010.

The band performed their first gig at the Groucho Club. Since then, they have also performed at many corporate events, as well as Pride events and music festivals – including the Edinburgh Festival, Perth Festival, the Brighton Festival Fringe and Glastonbury Festival.

Due to renewed interest in the band, they have recently started performing again with successful shows at the Leadenhall Building in London for The Outward Bound Trust and also at the V&A for the HIM CTP awards as well as various other events around the country.

La La Piano Bar is a New York style pop-up piano bar hosted by David Roper from 4 Poofs and a Piano and the voluptuous Lady La La. They bring together a fantastic line-up of celebrity, West End and a host of local talented singers.

The event is an experiential show based on ‘New York piano bar meets Berlin’s cabaret clubs’ with vocal indulgence from some amazing singers with inclusive sing-alongs and audience requests, and appeals to all ages.

La La Piano Bar has taken its magic up and down the country from Leeds to Manchester, Brighton and even to Barcelona to a large international show. They have also played at various festivals such as Brighton Fringe, Brockley Max, Telegraph Hill, Pie Eyed festivals and entertained large crowds.

Their brand of uplifting commercial dance has given them a string of international single and album releases alowing them to team up with Iconic contemporary artists including Viola Wills, Hazell Dean, Lonnie Gordon, Nicki French and Cilla Black

Their more recent album 'Klubkidz Eurovision Songbook' was released on Almighty records and saw the boys collaborating with pop bands Scooch and Tight Fit as well as Old Skool Diva Angie Brown. It also allowed then to work with more current 'X factor' and 'Britains Got Talent' finalists.

Klubkidz latest single on Almighty records is a remake of Sylvester classic 'Do You Wanna Funk' by Lady Bee and features a fantastic video and a remix package from international DJ Cutmore.

The new Klubkidz label launched with the 'Love is the only law - 50 years legal' charity single for Albert Kennedy Trust that featured a whole host of LGBTQI friendly stars including Jaymi Hensley, Marcus Collins, Tina Cousins, 4 Poofs and a Piano and a cameo from June Brown MBE.

Find out all the latest news & updates from LaLa Piano Bar by following us on social media.

'Just want to say a special thank you to David and Shamil and of course the fabulous Lady LaLa for creating a fabulous event to help celebrate my turning 30 bash, it was a night I will certainly remember!'

La La Piano Bar were sensational - book them for your launch! Can't recommend highly enough. And wow, thank you for my special song guys - it
isn't easy to work 'Insights into Liberating Leadership' into song lyrics!